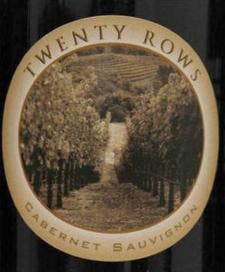 Just prior to Christmas, I was assisting a customer who asked if we had Twenty Rows Cabernet Sauvignon in stock. The look of satisfaction on his face as he placed four bottles into his cart made me curious about the wine. I researched it online later that day and found some favorable reviews, so my wife and I tried it at O’Bryan’s with some friends. It was so good that we ended up drinking a second bottle and one of our friends bought the last one to take home.

Twenty Rows is a second label of Vinoce, a boutique winery with a vineyard on Mt. Veeder. The North Coast bottling is mostly Cabernet Sauvignon with smaller amounts of Merlot and Petite Sirah. It is aged in French and American Oak and has an alcohol content of 13.5%. This highly pigmented wine is deep garnet in the glass. It opens with aromas of cassis, vanilla, and graphite. The body is medium to full, with notes of cassis, dark cherry, blackberry, leather, vanilla, and earth. However, the fruit-driven profile is balanced by acidity and a fine tannic structure. The finish is long and complex.

At $24.99 per bottle, Twenty Rows 2016 Cabernet Sauvignon North Coast is a lovely way to bring some California sunshine into the Midwestern, midwinter doldrums. We currently have it back in stock at O’Bryan’s, but I don’t expect the bottles to collect much dust.